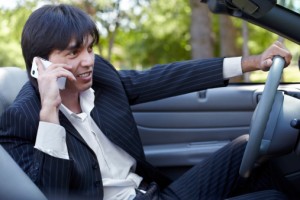 April is National Distracted Driving Awareness Month, according to the Department of Transportation’s National Highway Traffic Safety Administration (NHTSA). In an effort to increase awareness about the problem that is distracted driving, the agency is providing a wealth of information on just how dangerous the practice is.

According to their new SAFETY 1N NUM3ERS Newsletter, the agency says that distracted driving is getting worse instead of better. More and more people are using their cell phones and other devices while behind the wheel.

At any given daylight moment, an estimated 660,000 drivers are using their phone to text or talk while driving. This is significant because in 2011 more than 3,300 people were killed and 387,000 injured in distracted driving accidents.

While younger drivers are more likely to use their phone while driving, all age groups are affected. The NHTSA reports:

But while we usually think of cell phones as the biggest distraction (and they are), there are others. The NHTSA says there are three types of distraction: visual, manual, and cognitive. In other words, your hands can be on the wheel and you can still be distracted.

Of drivers who responded to the NHTSA survey that had been involved in an accident or near-accident within the past year, 2% said they were using cell phones and 3% said they were texting. Assuming everyone is forthcoming with their answers, that is 2-3% of accidents that could be prevented.

When you are involved in a car accident, it may be difficult to know what was distracting the other driver. But, when you are seriously injured, their distraction is the last thing you are worried about. Contact the Houston car accident lawyer Kevin Krist to discuss your accident and how you might be entitled to compensation for your injuries. Call 281-677-3965 now.