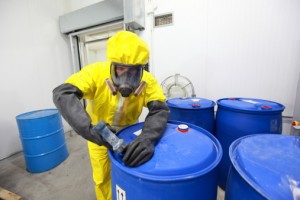 Work, for most, is a necessity—something we have to do to continue to survive at a certain lifestyle. Every job has hazards, however. In the manufacturing industry, there are many; and one of these hazards isn’t getting the attention it deserves from employers or the government regulatory agency known as OSHA.

The Occupational Safety and Health Administration (OSHA) was created to help make U.S. workplaces safer. The organization has volumes of regulations on workplace safety—two dozen pages on ladders and stairs alone. But, they fall short specifically in one area—chemical exposure.

There are tens of thousands of chemicals used in the manufacturing field. Thus far, OSHA sets standards for only a small number of them. The rest are left to employers to decide. And unfortunately for the workers, employers aren’t taking the risks seriously enough.

According to a lengthy piece in the New York Times, each year more than 40,000 Americans die from exposure to toxins in the work place. This is ten times more than those who die in mine collapses, explosions, or other high-impact accidents that get more media attention.

A slow, steady exposure to a toxic chemical can have numerous, life-changing effects. For their report, the Times focused on a North Carolina woman who was exposed to something called n-propylbromide (nPB) for five years during her job at a furniture plant. Her doctors have said it is this steady inhalation of nPB that led to nerve damage and ultimately the need for a cane and the inability to sit or stand longer than 20 minutes without pain.

Her employer says her problems are not their fault, despite others having the same issues. They say using the nPB is a matter of cost and lack of alternatives (not worker safety, obviously). They have been accused of not providing proper ventilators, turning off fans in workplaces, and having nPB levels far above what is considered “safe.”

And this is only one example.

For this woman and other victims like her, cost-effectiveness has little to do with the amount of profit their employer can turn for the minimal cost. They are more concerned with how much will have to be spent on future medical costs, wages lost due to a new disability, and the emotional pain of not being able to do the things they used to do or even being judged by others for their handicap.

Thousands of workers suffer at the hands of their employers, forced to deal with unhealthy work environments and the consequences of them simply because they need the paycheck. But you could be entitled to compensation for your injuries, and I may be able to help. Contact Houston personal injury lawyer Kevin Krist to discuss your case today. Call 281-677-3962 now.