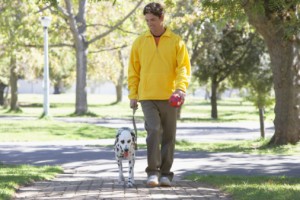 If you have a pet dog that requires a daily walk, you likely don’t think twice about your safety when walking your furry friend. For many, walking the dog in the morning  and evening is as routine a task as brushing their teeth. But, when you live in an area with other dogs, the morning walk could turn dangerous.

An Austin man was attacked recently by dogs as he walked in his neighborhood. According to KXAN, the man was walking his dog on Dovemeadow Drive in Austin when a pair of pit bulls attacked.

The man reported walking by a fence and seeing three dogs jumping at it, barking excitedly as he walked his small dog. When he passed the fence and looked back, he saw the three dogs had managed to get loose.

Initially, the dogs seemed playful, but the man moved to lift his dog into the bed of a nearby truck because of his small size and for fear the larger dogs would get aggressive. That’s exactly what happened as their playful attitude turned serious.

The man said he tried to climb into the truck when the dogs became more aggressive. But they attacked him.

Two of the dogs bit the man, one of them grabbing his leg and pulling him to the ground. The other bit his arm and thrashed his head back and forth with it in his jaws.

When it was all said and done, the man required several stiches to his arm and leg. He also may have suffered nerve damage due to bites he suffered on his elbow.

The owner of the dogs was charged with attack by dog, a third-degree felony that carries the potential for prison time. It isn’t clear what happened to the dogs.

Dog attacks can happen at any time. Unpredictable and aggressive dogs cannot be handled in the same manner that you handle a well-socialized and playful dog. They cannot be trusted. This is precisely why there are laws designed to hold dog owners accountable for their dog’s actions, including when they attack.

If you or your child are the victim of a Houston dog attack, contact personal injury attorney Kevin Krist. You could be entitled to compensation for your injuries. Call today at 832-924-3186 for a free consultation.