Could Another West Explosion Happen in Your Community?

You are here: Home » Blog » Burns / Explosions » Could Another West Explosion Happen in Your Community? 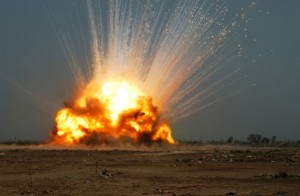 When the West Fertilizer Plant exploded in April, people across the state of Texas wondered if the same type of explosion could occur in their communities. That’s because this plant wasn’t one that most of its neighbors feared or thought posed a threat. But it did.

Fifteen people died when ammonium nitrate within the West Fertilizer Company ignited in a fire and caused an explosion. In addition to the fatalities, 150 buildings were destroyed and 160 people were injured. The area immediately surrounding the plant was leveled.

What the investigation found

In the years leading up to the fire and explosion, the plant was cited for violations involving the use, storage, and security of anhydrous ammonia. Though the company notified the EPA in 2012 about its storage of ammonium nitrate, the Department of Homeland Security said that it hadn’t received the necessary notifications.

As a result of the explosion and the concerns of communities across Texas, the State Fire Marshall’s Office has created a website to allow citizens to search for plants that may be storing this explosive chemical. The database, found here, allows you to put in your zip code and determine if any facilities exist that store more than 10,000 pounds (5 tons) of the chemical in that location.

For security reasons, the results won’t show details on the facilities or a complete list or map with all of the storage locations.

Since the West explosion, state officials have been inspecting such facilities en masse to be sure that chemicals are stored and reported properly. According to the Statesman, they have also updated their own records, ensuring that federal, state, and local databases are all in alignment.

It’s positive to see the state take steps to prevent another West fertilizer plant explosion, but explosions aren’t unique to these types of facilities. Nearly all manufacturing and industrial plants have some fire and explosion risks.

The refineries and storage facilities of the oil and gas industry are an example. Recently, an oil storage facility in Smith County exploded. While no one was injured, it took three different fire departments to get control of the blaze.

Who is responsible for these tragedies?

Whether you live in a community with a fertilizer plant or if you work in the oil and gas industry or in manufacturing, fires and explosions are a serious hazard. Employers are responsible for keeping workplaces safe and minimizing the risks of fires and explosions.

When a tragedy like the West fertilizer plant explosion happens, investigators have to determine what went wrong to determine who is at fault. Generally, however, the employer or the one who owns the facility is responsible for keeping it safe. Even in cases where an employee makes a mistake, the business owner can be held responsible for failing to train him or her properly or failure to supervise.

If you’ve been injured in an explosion or fire, personal injury attorney Kevin Krist may be able to help. Contact our office today to discuss your accident and the legal options available to you. Call 832-924-3178 today.