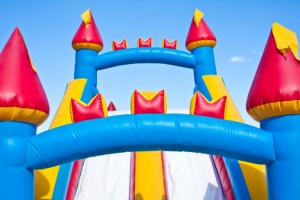 Bounce houses are used at parties, carnivals and festivals. People can rent them for family reunions and backyard birthdays. But many parents don’t know just how dangerous they can be, and even fewer realize they are tightly regulated by Texas law.

Bounce houses are accidents waiting to happen, particularly when they aren’t maintained or set up as prescribed.

Between 1995 and 2010, the number of bounce house injuries across the U.S. increased by 1500%, according to a study published in the medical journal Pediatrics. Dr. Gary Smith, director of the Center for Injury Research and Policy at Nationwide Children’s Hospital, authored the study after realizing more and more children were coming into the hospital with serious injuries suffered in these amusement structures.

How Dangerous are They?

In 2010, 31 children were treated in emergency departments every single day for injuries suffered in bounce houses. This amounts to about one child every 45 minutes.

A tear in the lining of the bounce house could send a child crashing to the ground. Improper set-up could cause the entire structure to flip, resulting in numerous children being injured as they are thrown to the ground and on top of one another.

Over a 20-year period, an estimated 65,000 children were treated for bounce house injuries in U.S. emergency rooms, Smith and his fellow researchers reported in the study. Fifty-five percent of those happened between 2005 and 2010.

As CNN reported last year, the severity and types of personal injuries suffered varied from child to child. Arm and leg injuries were the most common. About one-in-five children suffered head and neck injuries. Those under the age of 5 were most likely to suffer fractures while older children were more likely to suffer sprains and strains.

In the state of Texas, businesses have found success in renting these structures to private citizens and organizations for parties and events. Under Texas law, these structures are considered amusement rides and are therefore subject to the laws and regulations applied to other such rides.

Bounce house businesses in the state of Texas must be certified. This means they must undergo annual inspections and have a minimum $1 million insurance policy for personal injuries and damages.

According to a recent report from KHOU, many businesses are operating with a disregard for these laws. They are renting the structures, collecting the money, and taking a risk with all of the children who play in them.

KHOU set up a sting, renting structures and then meeting with business owners before revealing who they were. Those they met with were uncertified. Their bounce houses were not inspected and their safety was questionable.

The Texas Department of Insurance (TDI) is tasked with regulating the industry, and the department identified several companies skirting the law. When this happens, it sends a letter to the company letting it know it is not in compliance. If that company continues to operate, it can face being shut down and even criminal charges.

Since 2011, TDI has referred 200 cases of noncompliance to the Attorney General’s Office for enforcement. Of those, 130 are closed because they ceased operations or came into compliance.

What Can You Do?

As a parent, it’s your job to make sure your child is safe. You can take a proactive role before having a bounce house at your next party by looking to make certain the company is compliant. TDI offers this updated record of those in compliance.

To stay extra safe, don’t let children under the age of 6 play inside a bounce house. Don’t allow children to horseplay. Jumping and bouncing in these structures is fun enough; flipping or pushing each other around increases the likelihood of an accident. Finally, always stay near. Adult supervision is crucial.